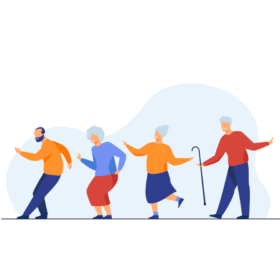 More and more scientific papers are highlighting the health benefits of fecal microbiota transplantation (FMT). The administration of stool from a healthy individual into the digestive tract of a person with a pathology related to the gut microbiota has shown very interesting results. It is even recognised as a treatment for recurrent Clostridium difficile infection. But did you know that it offers hope for limiting the effects of ageing?

Eternal youth has always fascinated humanity. In a society where we are gaining years of life thanks to medical progress, aging without looking old or being sick is the quest of most of us. This is potentially possible thanks to the intestinal microbiota.

What are the effects of aging on the gut microbiota?

It is now known that the gut microbiota, once developed and matured around the age of 2-3 years, is stable throughout life. Nevertheless, there is a loss of diversity and a change in composition around the age of 60-70. A dysbiosis appears, linked to alterations in morphology and physiological functions. Consequences:

For more details, read this infographic.

Modulation of the intestinal microbiota is an avenue to be explored in order to better cope with the effects of ageing.

Is FMT a solution to reverse ageing?

This is what a recent study published in the journal Microbiome suggests. This preliminary study conducted on mice at the University of East Anglia shows both surprising and encouraging results.

The research team exchanged the gut microbiota of:

After analysis of the changes in gut composition and metabolomics due to FMT in the different mice, it was found that:

This new evidence shows that the intestinal microbiota plays a major role in ageing. But also that its manipulation has the potential to restore some of the consequences of ageing, opening the possibility of new therapies. Further studies to provide more information on the duration of effectiveness of such a treatment and its effects on humans will be needed to support these promising results.