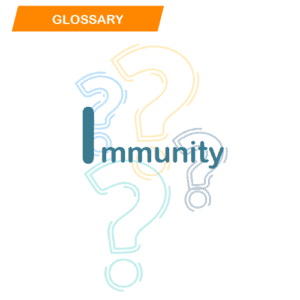 During this difficult time, having a strong immunity is important. Indeed, external threats like virus can cause serious disorders in immunocompromised people.
Strengthening the barrier effect of our intestinal microbiota to limit the spread of the virus may be an alternative to consider.

How does the body defend itself against attack by external factors?

To protect itself against pathogenic agents, our body employs its own defence mechanisms: the immune system. The immune system, made up of a set of cells, tissues and substances that combat infection, is hosted to the tune of almost 70% in the gut. It defends the body, developing humoral and cell-mediated immune responses designed to protect us against pathogens that could trigger an inflammatory reaction.

With age, fatigue or stress or as a result of lifestyle factors, the immune systems can be weakened, making the body more vulnerable to infections. Some people are also more susceptible, such as children, who have an immature, fragile immune system, pregnant women and also athletes, whose immune systems are weakened.

The skin and mucous membranes are the first natural defence, limiting the passage and adhesion of harmful microorganisms thanks to their barrier effect.

Thanks to the bacteria composing it, along with its epithelial cells and tight junctions, the intestinal mucosa, or gut lining, allows selected substances to pass through. However, some factors can affect its integrity and alter its permeability, thereby encouraging the tight junctions to loosen and let harmful substances through into the bloodstream and lymph system, via a phenomenon known as leaky gut syndrome. These substances then cause inflammation.

Probiotics play a genuinely protective role, reinforcing the barrier effect of the gut lining by modulating the composition of the microbiota, which used to be known as the gut flora. They help re-establish a healthy gut microbiota by restoring the balance between beneficial and harmful bacteria. The gut can thus fully play its filter role again, trapping harmful substances.

Probiotics also act on the inflammatory responses by regulating substances involved in this process: as a result, inflammation is reduced.

The innate immune system or inflammatory response, the body’s second line of defence, corresponds to non-specific and immediate mechanisms. Once infectious agents have got into the body, the pathogenic microorganisms will be recognised by the immune cells. These have receptors on their surface that are activated whenever they recognise an infectious agent, thereby triggering a cascade of intracellular signals.

If the innate immune system is not capable of stopping the microorganisms, the adaptive immune system takes over. This involves a reaction that takes several days to be put in place and is specific to a pathogen. It involves two types of specialised cells: B cells (or B lymphocytes), which are mediators of humoral immunity and whose main role is to inactivate and eliminate the pathogenic agent by producing specific antibodies (immunoglobulins) and T cells (or T lymphocytes), which are mediators of cellular immunity and whose role is to recognise and destroy cells that the body considers to be abnormal.

The adaptive immune system has a memory, meaning that it can react more quickly and more effectively when it comes into contact with a pathogen that it has already encountered.

What effects do probiotics have on the immunity?

Probiotics can be a valuable aid to strengthen the body’s natural defences.

Thanks to their immunostimulant effects, they activate a larger number of immune cells, which then increase the secretion of antibodies against the antigens of pathogenic agents. 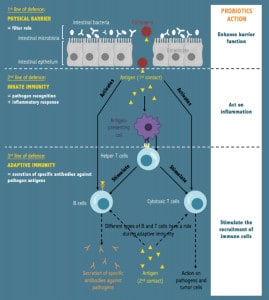