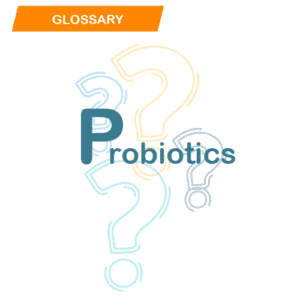 According to World Health Organization (WHO), probiotics are live microorganisms that, when administered in adequate amounts, confer a health benefit to the host. These microorganisms are mainly represented by bacteria and yeast. They act on the balance, integrity and diversity of the intestinal microbiota, especially in cases of dysbiosis.

There are different types of probiotics, which can be classified into several categories : lactic ferments such as Lactobacilli and Bifidobacteria that can produce lactic acid by sugar fermentation ; yeast, the best known being Saccharomyces cerevisiae ; and spore-forming bacteria, such as Bacillus subtilis, which is able to be in spore form and withstand extreme conditions.

However, all microorganisms can’t claim to be probiotics. A set of requirements and evidence of beneficial effects on humans is behind the probiotic selection. Therefore, a microorganism can be considered as a probiotic if it meets a number of safety, functional and technological criteria.

The probiotic selection is based on tests performed on the strain (in vitro), its beneficial effects on health, and its possible industrial production. 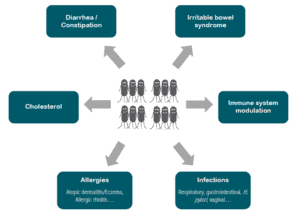 However, all probiotic strains haven’t the same action fields. Thus, a strain alone or an association of strains have their own effects, which can’t be attributed to other strains or combinations.

Several mechanisms of action can be allocated to probiotics in order to bring their benefits: probiotics compete with pathogen for available nutrients or for adhesion sites on the intestinal epithelium ; probiotics stimulate the immune system by increasing the antibodies release to recognize and eliminate unwanted molecules ; and/or probiotics secrete antimicrobial agents such as bacteriocins, which are toxic to pathogens.