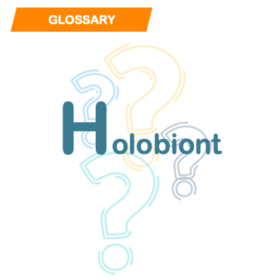 Holobiont… A mysterious term that has been emerging for the last ten years. What is its meaning?

Humans, animals, plants…. We all have one thing in common: we are made up of a wide variety of micro-organisms (bacteria, yeast, viruses, fungi, etc.). We are “Jamais seul” (never alone), as Marc-André Selosse puts it in his book of the same name: organisms resulting from the evolution of life have always had to deal with microbes.

This microbial community, present in and on animals / plants / humans, forms ecosystems called microbiota. The most popular, or at least the most studied in humans, is the intestinal microbiota. We cannot live without this multitude of micro-organisms that influence the functioning of living beings: all organisms establish relationships with microbes. These influence behaviour but also many biological functions such as development, reproduction, nutrition, or immunity. With this in mind, and with scientific discoveries increasingly addressing the roles of microbiota, the term ‘organism’ is becoming obsolete. Each living entity forms a community or “supra-organism” with its micro-organisms, called a holobiont.

From the Greek “holos” for “all” and “bios” for “life”, the holobiont corresponds to this host-microbiota combination. In other words, it is defined as the individual or host, accompanied by its micro-organisms.