Probiotics: a strategy to consider for the management of allergic rhinitis 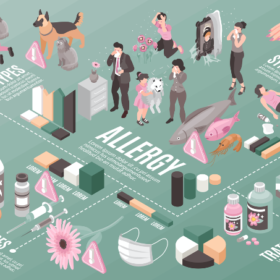 Allergic rhinitis affects a quarter of French people. Can probiotics come to the rescue of these people to relieve them?

What is allergic rhinitis?

Allergic rhinitis (AR) is the most common manifestation of respiratory allergy. It occurs:

AR is one of the most common diseases in the world. On average, it affects 20-30% of adults and up to 40% of children.

It is a major inflammatory disease because of its high prevalence, health impact and costs.

Drug intervention is often required to improve AR. However, conventional treatments can be associated with adverse effects. They can also be expensive, time-consuming and only partially resolve symptoms. Therefore new strategies should be considered, such as the consumption of food supplements, which are more easily accessible and less expensive. In particular, food supplements based on probiotics should be considered. These are live micro-organisms which when administered in adequate amounts confer a health benefit for the host, including on the immune system. Indeed, in addition to rebalancing the intestinal microbiota and strengthening the barrier effect, probiotics can be of a real interest in the management of AR.

What are the symptoms of allergic rhinitis?

AR is the result of an abnormal and excessive immune system response following contact with an allergen, which is often inhaled. An allergen is a foreign substance to our body, usually harmless and present in the environment, such as pollen, dander, dust mites or molds. For allergic people, and due to genetic predisposition, the immune system becomes disoriented.

The disease can evolve in very different ways depending on the individual. It may regress spontaneously or become complicated by infections, chronicity or asthma. Although generally benign, AR has significant impacts on quality of life:

What is the link with the intestinal microbiota?

The increase in its prevalence in recent years, particularly in developed countries, has led to the formulation of various theories to explain it.

Thus, AR may originate from changes in the gut bacteria establishment during infancy, which is considered as an important period for immune system development. Almost 70% immune cells are housed in the gut. A healthy gut microbiota is therefore crucial for the formation of a mature and effective immune system.

In addition, gut microbiota comparison between AR and healthy people shows that there is an imbalance of gut microbiota for sick individuals. This imbalance is also called dysbiosis. People with AR have a distinct gut microbiological profile, with reduced microbial diversity and an altered composition of certain gut microorganisms:

This altered ratio may result in a reduction in butyrate production and thus affect the integrity of the intestinal barrier. It should be noted that people suffering from allergic diseases have an impaired intestinal barrier, manifested by mucosa hyperpermeability. The gut then allows the passage of exogenous substances such as allergens that, under normal conditions, would not penetrate with a preserved barrier.

This close relationship between the intestinal microbiota and AR suggests that the gut microbiota modulation by probiotics could be considered to prevent and/or intervene in the management of AR.

What is the place of probiotics in the management of allergic rhinitis ?

Currently, the management of AR includes:

However, these drugs are relatively expensive, carry a risk of developing adverse effects and focus on symptom control without complete resolution.

Among the alternative methods being explored, and given the involvement of the gut microbiota in AR, probiotics may be more cost-effective and of real interest in the prevention and management of their symptoms.

Generally, probiotics are known to modulate the intestinal microbiota composition of the gut microbiota and interact with the mucosa and the immune system, thereby restoring the intestinal epithelium integrity, regulating the inflammatory response and strengthening the body’s defenses.

These mechanisms of action are not fully understood in AR. Nevertheless, probiotics could modulate immunity by improving the immune responses, through the regulation of inflammation mediators such as cytokines.

Several reviews provide an overview of the effects of probiotics in people with AR.

Probiotics therefore appear to be of interest in the management of AR. They have been shown to reduce the severity of the disease by reducing symptoms and inflammation, thereby improving the quality of life of people with AR, without adverse effects.