Does meditation improve health via the microbiota? 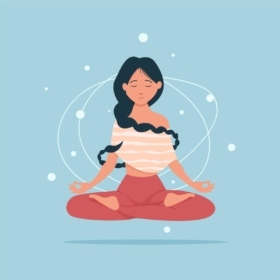 A team of researchers has analysed the composition of the intestinal microbiota of Buddhist monks to determine the impact of meditation on health.

Many studies have shown the positive impact of regular meditation exercises on physical and mental health. Reduced anxiety, modulation of emotions, regulation of attention… these are just a few examples that can be cited.

In addition, more and more scientific studies have confirmed the influence of the intestinal microbiota on the brain, with an action on mood, stress, and cognition via the microbiota-gut-brain axis.

Therefore, a team of researchers has put forward the following hypothesis: could it be that meditative exercises can act on the microbial composition of the microbiota?

To verify their hypothesis, the scientific team took faecal samples from 56 individuals. Among them,

Participants were not required to have consumed products that could alter the richness and diversity of the microbiota, such as probiotics, prebiotics, yoghurt, antibiotics, or antifungal drugs in the previous 3 months.

After analysis of the samples by 16S RNA sequencing, it was found that the phyla Bacteroidetes and Firmicutes were dominant in both groups.

However, in the group of Buddhist monks:

The researchers added: “Collectively, several bacteria enriched in the meditation group were associated with the alleviation of mental illness, suggesting that meditation can influence certain bacteria that may have a role in mental health”.

To go further, the scientists sought to define the roles played by these bacteria.

They then noticed an improvement in metabolism and several protective anti-inflammatory pathways in the Buddhist monks.

Finally, after blood analysis, they also found significantly lower levels of total cholesterol and apolipoprotein B (both associated with increased cardiovascular risk) in the monks compared to the residents neighbouring the temples.

Long-term meditation may therefore have a positive impact on health. Indeed, the enriched microbiota of the monks was associated with a reduced risk of anxiety, depression, and cardiovascular disease as well as improved immune function.

However, although these results are interesting, it should be noted that the study only included a very small number of individuals, all male, living in a particular environment. Further studies are needed to confirm these results.