Beer for my gut microbiota 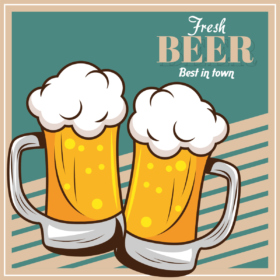 We can now toast the health of our intestinal microbiota with a beer! The results of a recent study highlight the unsuspected benefits of this beverage for our bacterial flora. This news is likely to delight many people.

Blood and faecal samples are collected at the beginning and end of the study. The gut microbiome is analysed by 16S RNA gene sequencing.

Similar effects between beer with and without alcohol

The results published in the Journal of Agricultural and Food Chemistry indicate that the effects of beer with or without alcohol were similar.

Furthermore, it turns out that contrary to popular belief, beer with or without alcohol did not lead to:

Both drinks also tended to increase the activity of faecal alkaline phosphatase, a marker associated with good intestinal health. Indeed, it plays a role in the detoxification of LPS and in the control of intestinal inflammation.

According to the researchers, these benefits are attributed to the polyphenols contained in the beer and not to the alcohol, which, it should be remembered, can have deleterious effects on health.

A further, larger study is planned soon, this time including women in the panel, to confirm or refute these results.