Does the microbiota dictate our alcohol consumption? 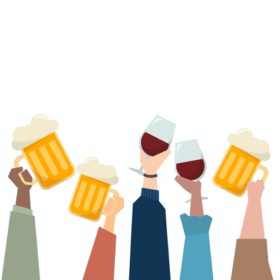 Alcohol is part of many social events: there is often a good reason to drink! However, it seems that we are not all equal in terms of its effects… And we will not develop the same disorders either.

And this would depend in part on the composition of the intestinal microbiota. At least that is what a recent study has revealed.

Clinical trial points to role of microbiota in alcohol consumption

A team of researchers from the Universidad Complutense de Madrid has investigated the role that the gut microbiota could potentially play in alcohol consumption.

For this purpose, 507 students participated in the study. Their task was:

According to the results, “heavy episodic drinking is associated with a specific stool type phenotype”, more precisely the type 1. This means that heavy alcohol consumption was associated with constipation. (Separate hard lumps, like nuts). In addition, the researchers also observed a strong increase in the abundance of Actinobacteria in people who regularly consumed large quantities of alcohol.

In parallel, the scientists carried out a series of experiments on rats to understand whether the changes in the intestinal microbiota are due to excessive alcohol consumption or whether, on the contrary, the microbiota is responsible for increased consumption.

Second test consisted of administering a cocktail of antibiotics, known to deplete the bacterial population of the microbiota. Taking these drugs helped to reverse the trend by reducing consumption.

These encouraging results pave the way for promising research. These could provide the beginnings of answers to relieve people suffering from alcoholism. Researchers are considering the possibility of helping them by supplementing them with probiotics, prebiotics or synbiotics to improve their digestive comfort.

However, further studies are needed, to identify more precisely the bacteria involved in the link between microbiota and excessive alcohol consumption.

*A classification of human stools into 7 types, based on their appearance (colour, shape) and consistency. It is a quick diagnostic tool for constipation and diarrhoea.