A pill to learn more about the gut microbiota 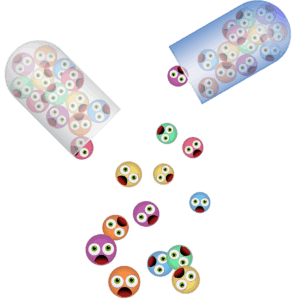 The gut microbiota, an organ difficult to define…

The intestinal microbiota… What a vast organ! It consists of a very large number of microorganisms including one hundred thousand billion bacteria, the majority of which is housed in our intestines. Bacteria are ten times more numerous than our human cells. we are largely composed of bacteria, with whom we live in symbiosis.

We develop our intestinal microbiota from birth. It becomes more complex with time until it becomes mature after 2-3 years.

Very complex and diversified ecosystem, it is at the origin of many health essential functions  like the process of digestion or the immunity. However, there are many factors that can cause its imbalance (dysbiosis) and cause dysfunctions: intestinal discomfort, weak immune defenses, etc.

To learn more about these microbes and their roles, you need to be able to study them. Not easy to get there because our intestines are not easy to access. Currently, it is the study of our stool that gives information to scientists. Nevertheless, the bacterial composition of these mainly reflects that found in the colon. A shadow part then exists concerning the bacteria contained at the beginning of the intestines.

That is why a research team from Tufts University in the United States pondered the question. The concept? They developed a pill which was able to recover samples of our microbiota in all intestinal regions and this, in a specific way.

They created a classic size pill, biocompatible and printed in 3D.

The pill sampler moves down the GI tract primarily due to natural peristalsis. The pill, however, can be held at a speciﬁc location inside the GI tract using an external magnet. Immobilizing the pill enables preferential sampling of speciﬁc regions of the gut, so that more of the collected sample originates from this region. Without this magnet, the pill would sample more or less uniformly along the entire length of the GI tract.

The pill is bicompartmental. It consists:

…based on the principle of osmosis

The pill works thanks to the osmosis phenomenon. Osmosis is a net movement of a solvent from a less concentrated region (hypotonic solution) through a semipermeable membrane toward a region of high solute concentration. Once the pill is primed, the process of osmosis causes solvent (water) to ﬂow across the membrane from the helical channels into the salt chamber. The ﬂow rate depends on the properties of this membrane (e.g., thickness, porosity, area) and the salt gradient across it. The ﬂuid sampler consists of an osmotic pump that continuously pulls the ﬂuid from the gut into the collection channels. No battery is needed: it is an exchange between the pill and the intestinal lumen. It is all about pressure.

A fluorescent dye is also included in the pill to detect it more easily after excretion in stool.

The authors conclude that this is a minimally invasive and inexpensive method to better understand the microbiota and study real-time treatments.

A nice innovation that could improve our knowledge on the composition of the gut microbiota and its role in certain pathologies.